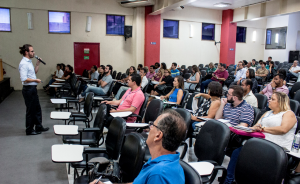 For 99% of Brazilians – and world citizens, in general – the UN seems to be something distant, a world of serious-face people wearing suits and taking important decisions in air-conditioned rooms. So, I am not surprised to hear a straightforward “no” when I approach random people or even friends working in different business companies than international cooperation ones with the question: have you ever heard of the SDGs?

Still, my main lesson learned while working at the World Centre for Sustainable Development (RIO+ Centre) for the past 3 months as a visiting researcher is the following: this “distant UN world” does carry a very strong and positive image of well-intended people with altruistic values, willing to make the world a better place to live. If this image is used to engage as much citizens as possible in the new sustainable development agenda, the SDGs have serious chances of becoming a successful initiative.

This “engagement power” that the UN has could not be better perceived than in those occasions when our RIO+ team left our air-conditioned office at Rio de Janeiro centre and went into the less-well off areas of Rio’s metropolitan zone, the Baixada Fluminense. These opportunities included, for example, visits to a very interesting project that the RIO+ Centre is conducting with local musicians from Belford Roxo and surrounding cities, using music as an engaging tool for youth.

Already understanding the importance of linking with areas that are not used to receive UN events, my RIO+ colleagues came to me with a very clever idea. In my very last day in Rio, instead of having a final and sober meeting at the office, I should give a presentation at Duque de Caxias, the third most populous city in Rio de Janeiro state. Perfect.

The Global Soil Week team of the IASS – my institution of origin – established a partnership with the Brazilian colleagues to study which are the initial actions of the Brazilian Government and society to make the SDGs a reality in the country.

The study we are preparing maps many initiatives directly related to the SDGs that are mushrooming all over Brazil and identifies some challenges to make progress in this agenda – it will be published in July 2017 by RIO+ Centre. There are challenges related to increasing participation, ensuring transversal and integrative thinking and strengthening accountability.  You can find my presentation with some preliminary results here.

Localization – bringing the SDGs to the local level

One of the main challenges we found was the localization process, that is, how to move the knowledge and actions related to the 2030 Agenda from UN bodies and Federal offices to local institutions, such as municipalities, local NGOs and companies. So, to present the preliminary results of this study in an event co-organized with the Municipality of Duque de Caxias and the University UNIGRARIO made a huge sense.

To conclude I would like to bring a point from the discussion as an example of why we need to take the localization process very seriously. As much as the UN can produce guidelines, strategies and guiding reports, abstract wording must be translated into real, concrete and local action. And this is something that can only be done by those that know local realities.

There I was, making my presentation full of buzz-UN-words such as multi-stakeholder approach, integrated approaches and universality. First round of questions, people seemed to like and agree with the content, but there was an overall claim for more concrete proposals, in other words, things that the people and the municipality of Duque de Caxias could start doing tomorrow. I started sweating as I simply had no clue nor a concrete proposal in my pocket for the city itself (by the way, nor I believe it is the role of the “international expert” for making this proposal).

The representative of the Secretary of Culture of Duque de Caxias raised the hand. He thanked the presentation and suggested requesting a joint meeting with the Mayor to discuss four points:

This article was originally published on RioPlusCentre.org